Viris
to je to

As part of the Balkan Squad team together with Miroslav Stampar and Igor Lukic, we had a great opportunity to be part of the CyberWeek event. We have been hosting HackerSpace CTF as part of the Capture All the Things Village.

We even created one extreme challenge which consisted out of 3 steps to open the treasure chest and to achieve the final flag, which was hidden in a well-locked chest.

Our CTF was as its name stated HackerSpace CTF and we had challenges from these areas:
– Reversing
– Mobile apps
– Cracking
– IoT (Radio, RFID, logic gates, DOS to create some service outage)
– System hacking

For two days we have been enjoying great people and some of the good players. It was true, that we competed in the same booth as the local CTF.ae team, which also prepared a great CTF, but we found out we could cooperate in different ways.
We also connected a rotating light in our booth, so every time a correct submission was made, the light was triggered.

We were honored to get a visit from such a great hacker as Chema Alonso is. We are still using one of the amazing tools called FOCA for document metadata searches.
In the end, the winner was the Red Team from Abu Dhabi led by Tudor Enache, who managed to score most of the points at our CTF. We are sure, that the reward went to the right hands and we hope to see him and his team again in the future. 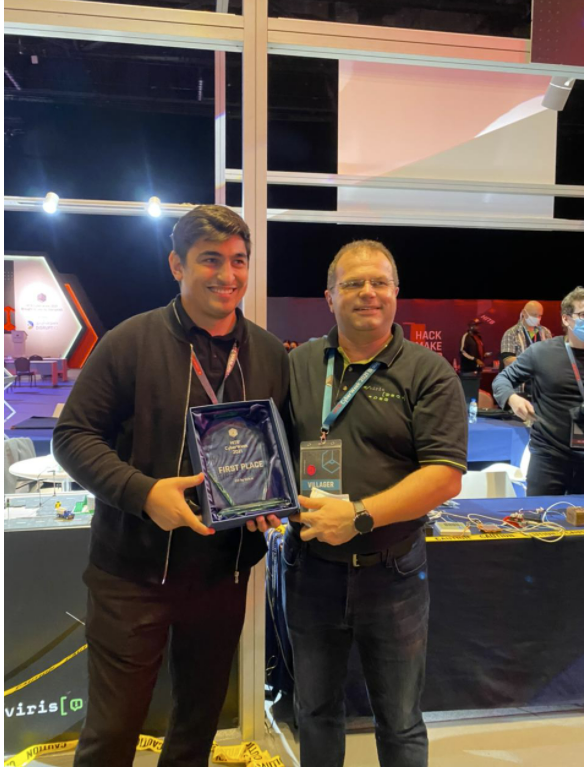 Visit us on social media

This website uses cookies to improve your experience while you navigate through the website. Out of these cookies, the cookies that are categorized as necessary are stored on your browser as they are essential for the working of basic functionalities of the website. We also use third-party cookies that help us analyze and understand how you use this website. These cookies will be stored in your browser only with your consent. You also have the option to opt-out of these cookies. But opting out of some of these cookies may have an effect on your browsing experience.
Necessary Always Enabled
Necessary cookies are absolutely essential for the website to function properly. This category only includes cookies that ensures basic functionalities and security features of the website. These cookies do not store any personal information.
Non-necessary
Any cookies that may not be particularly necessary for the website to function and is used specifically to collect user personal data via analytics, ads, other embedded contents are termed as non-necessary cookies. It is mandatory to procure user consent prior to running these cookies on your website.
SAVE & ACCEPT